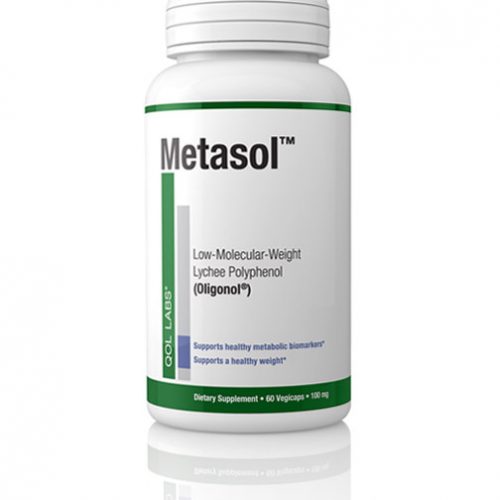 Metasol® is a particularly innovative antioxidant and anti-aging nutritional supplement. It contains oligomerised polyphenols – the first supplement in which polyphenol polymers have been successfully converted into oligomers, molecules with superior bioavailability and much greater biological activity. The polyphenols in Metasol® have a low molecular weight – they are thus easier to absorb. Studies comparing Metasol® with extracts of green tea, apple, grapeseed and pinebark, show that Metasol:

Metasol is derived from lychee fruit. Lychee has been a valued fruit renowned for thousands of years for promoting healthy aging. In ancient China, the Emperor’s concubine, Yang Gui Fei, reportedly maintained her breathtaking beauty for all the many years of her life because of lychee which the Emperor horded from all over China for her use only. The lychee, from which Metasol is made, is native to low elevations of the provinces of Southern China but its cultivation has spread over the years through neighboring areas of southeastern Asia. Lychee has a high content of polyphenol polymers and through a patented process; these unique molecules can be made to be more absorbable by the body. A proprietary extract of lychee fruit manufactured using a patented technology that boosts polyphenol bioavailability of the product and thereby enhances the product’s anti-oxidant capacity. Polyphenols are abundantly present in plants and are known for their ant-oxidant and anti-aging properties. Metasol is produced through a proprietary process that shortens polyphenol polymers into monomers and oligomers to form a unique oligomerized polyphenol, producing greater bio-availability to the body than conventional polyphenols, such as: pine bark, grape seed, apple and green tea. Metasol is shown to be 5 times more bio-available resulting in speedier absorption than conventional polyphenols . Metasol decreased more than 10% of the lipid peroxide level in blood and improved lucidity and sleep pattern in a human study.* Metasol was more effective in many parameters in a study on cognitive function than conventional polyphenols. Extensive in vivo toxicity studies show Metasol to be safe with no adverse effects or negative interactions. Laboratory testing also reveals that Metasol is a stable substance. Scientific research reveals that Metasol is a safe, powerful anti-oxidant that can slow the aging process.* Clinical studies supporting Metasol as an efficacious healthy aging dietary supplement were conducted in the following areas:

*These statements have not been evaluated by the Food and Drug Administration. This product is not intended to diagnose, treat, cure, or prevent any disease.