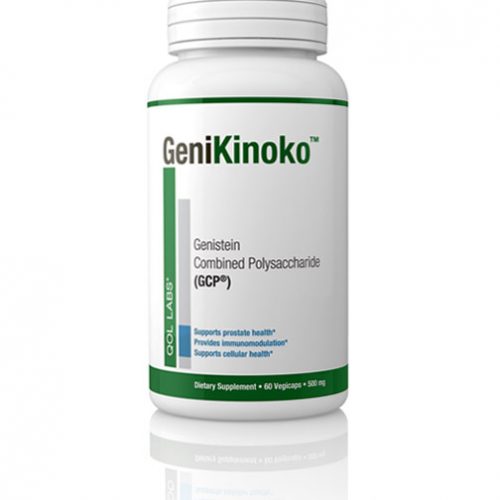 NOW WITH OVER 90,000 VIEWS PLEASE READ OUR ARTICLE ON GCP/AHCC AT  https://pulsenutritional.com/articles/

What is GCP? GeniKinoko™ contains GCP , a novel functional health food produced by the fermentation of soybean isoflavone extracts with basidiomycetes mushrooms. GCP is an acronym for Genistein Combined Polysaccharide and is derived from organic, GMO-free soybeans developed in Japan. GCP offers a rich content of isoflavone aglycones, especially genistein, as well as a rich content of polysaccharides from basidiomycetes. Why fermented soybeans? Fresh soybeans and other legumes contain isoflavones in a natural, glycosylated state. The hydrolysis of fermentation changes glycosylated isoflavones into aglycones. Isoflavone aglycones are more readily absorbed by the body than in the natural state. These aglycones are abundant in fermented soy products such as miso and natto. Much like culturing cheese, the bacteria used to ferment the soy determine the final product. What role do the mushrooms play? In traditional folk medicine, basidiomycetes mushrooms are useful in boosting the immune response.* Today, scientists attribute this quality to their polysaccharide content. In addition, some basidiomycetes mushrooms are known to produce glucosidase enzymes when fermented. Glucosidase enzymes have the unique ability to convert isoflavone glycosides into glucose and genistein aglycones.  How does GCP affect immune response? In the human immune system, T-cells identify, attack and destroy foreign invaders. Polysaccharides are reported to support T cell function.* GCP contains a rich content of polysaccharides. How safe is GCP? Very. GCP is a natural and organic soy product and is considered a functional food. Soybean and soybean products have been consumed by millions of people for thousands of years with great health benefits and no significant side effects. Similarly, basidiomycetes mushrooms, such as Lentinus edodes and Ganoderma lucidum, have also been used in culinary and medicinal ways for thousands of years. There have been no serious adverse effects reported from the use of GCP in humans. *These statements have not been evaluated by the Food and Drug Administration. This product is not intended to diagnose, treat, cure, or prevent any disease.